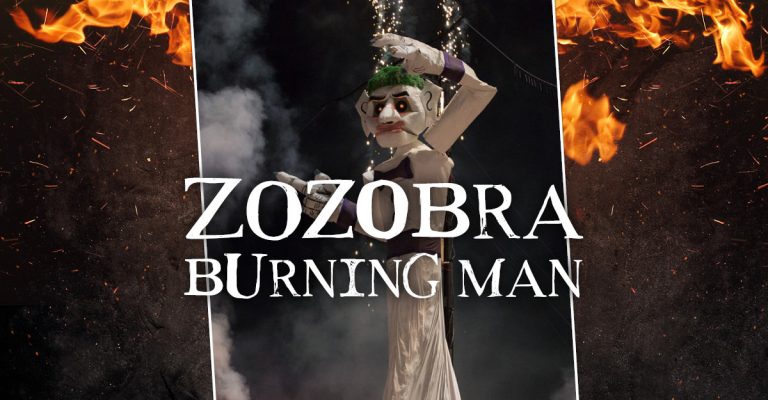 Zozobra is a hideous but harmless fifty-foot bogeyman marionette. He is a toothless, empty-headed facade. He has no guts and doesn’t have a leg to stand on. He is full of sound and fury, signifying nothing. He never wins. He moans and groans, rolls his eyes and twists his head. His mouth gapes and chomps. His arms flail about in frustration. Every year we do him in. We string him up and burn him down in a blaze of fireworks. At last, he is gone, taking with him all our troubles for another whole year. Santa Fe celebrates another victory. 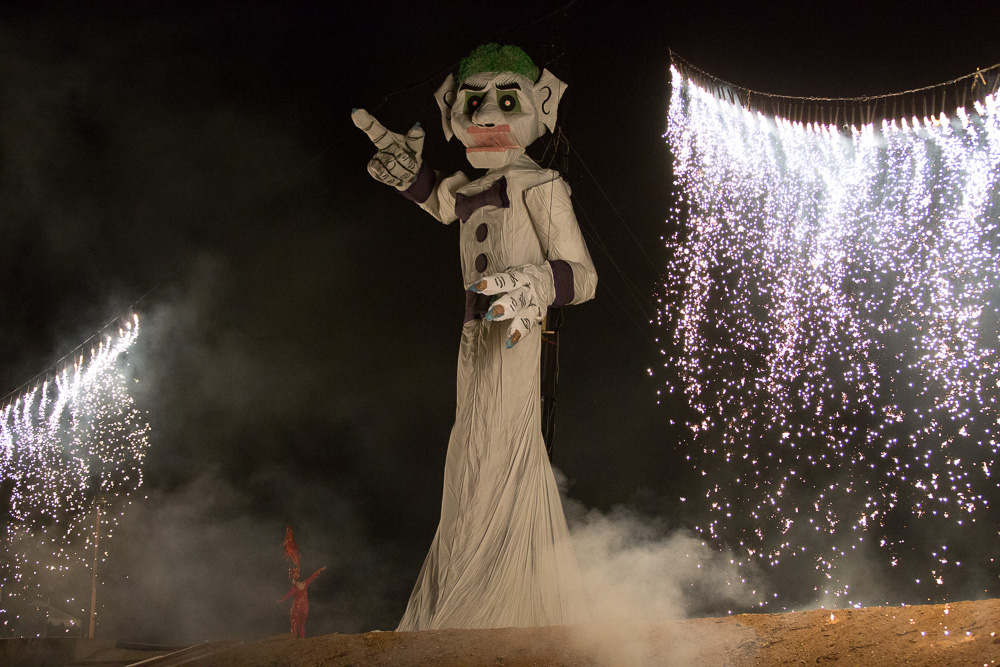 Will Shuster with Zozobra The Burning of Zozobra, which has taken place yearly since being created by Will Shuster in 1924, has become one of the symbols of the city, a potent reminder of the madcap celebrations of Santa Fe’s past, and one artist’s generous dedication to his adopted home.

This group of creative rebels tried to interest the city leaders of the day into interjecting a bit of light-hearted merry-making into autumn events but received a cold reception. Striking out on their own, these renegades decided to create their own counter-event, which they called Pasatiempo.

William Howard Shuster, Jr. (1893-1969), familiarly known as Will, crafted the first Zozobra in 1924 as the focus of a private fiesta event at his home for artists and writers in the community. His inspiration for Zozobra came from the Holy Week celebrations of the Yaqui Indians of Mexico; an effigy of Judas, filled with firecrackers, was led around the village on a donkey and later burned. Shuster and E. Dana Johnson, a newspaper editor and good friend of Shuster’s came up with the name Zozobra, which was defined as “anguish, anxiety, gloom” — in Spanish, “the gloomy one.”

While torching their hand-made effigy was the climax of their party, Shuster and his fun-loving pals also came up with the notion of dressing their pets in costume and parading them around the Plaza, along with creating a spoof of the most notable local events that had taken place over the past year. 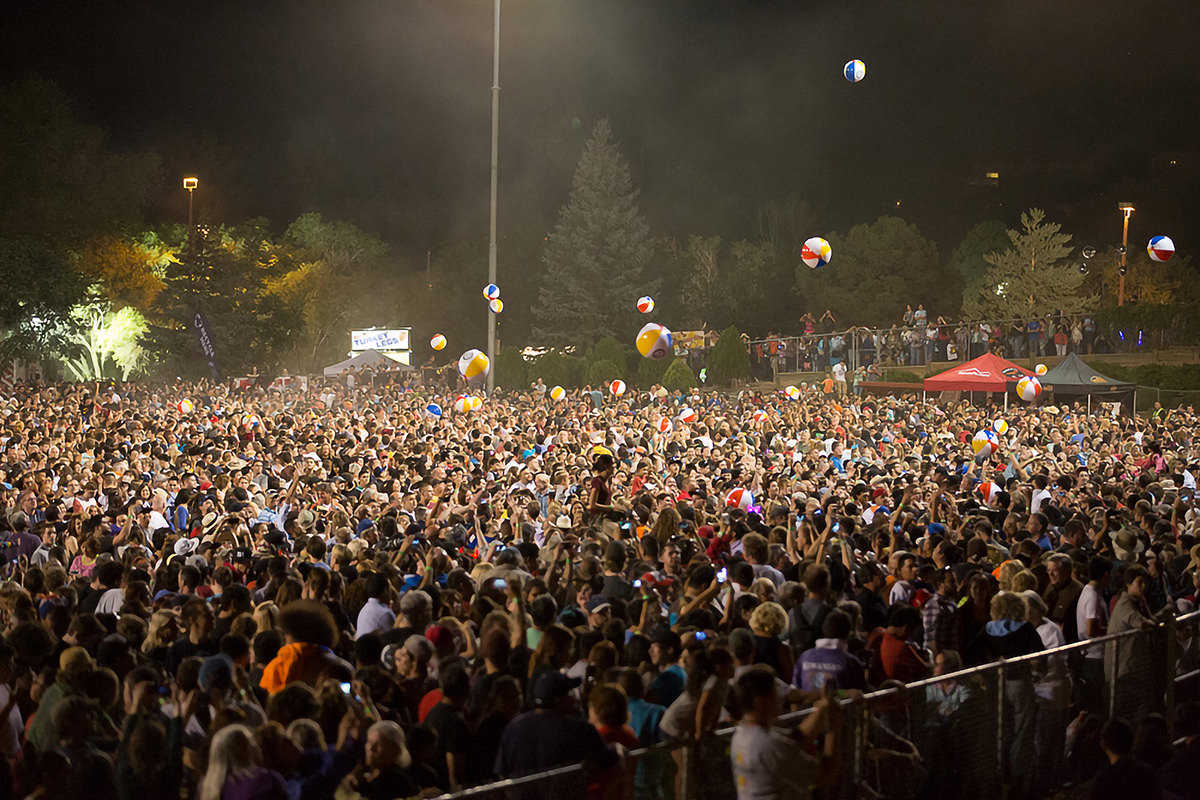 The Kiwanis Club of Santa Fe became officially involved with Zozobra in 1963, and on June 19, 1964, Shuster assigned all rights, title and interest in Zozobra and retains exclusive copyright and trademark to the figure. The Kiwanis Club has faithfully continued the Zozobra tradition, and as the Club’s major fund raiser, the event has become a rewarding way for Santa Fesinos and visitors from around the globe to have fun and at the same time, participate in valuable community service.

The Burning of Zozobra, staged each year on the Friday before Labor Day, centers on the ritual burning in effigy of Zozobra, in order to dispel the hardships and travails of the past year. In 2019, the event attracted 64,000 spectators, who gathered together at Fort Marcy Park to view the conflagration ritual and fireworks display. The effigy is a giant animated wood and cotton cloth structure, one of the world’s largest functioning marionettes, able to wave his arms and move his mouth to growl ominously at the approach of its fate. His archenemy, the Fire Spirit Dancer, dressed in a flowing red costume and headdress, is armed with a pair of blazing torches to seal Zozobra’s fate. The fire dance was originated by Jacques Cartier, former New York ballet dancer and local dance teacher, who performed the role for 37 years. Cartier was succeeded by one of his students, James Lilienthal, who took over the Fire Dancer role in 1970, performing it for over 30 years and passing the role on to his daughter. Today this coveted role is held by Santa Fe native, dancer Helene Luna.

Cartier talked about his experience over years spent as the Fire Dancer. “It damn near killed me half a dozen times,” he said, “and I even broke both my ankles; thank God, not at the same time.” Cartier noted that, “The idea of Zozobra grew out of a gang of Santa Fe deep-thinkers who met in something called ‘Society of Quien Sabe.’ They met once a month and membership was based on how well you could tell yarns.” 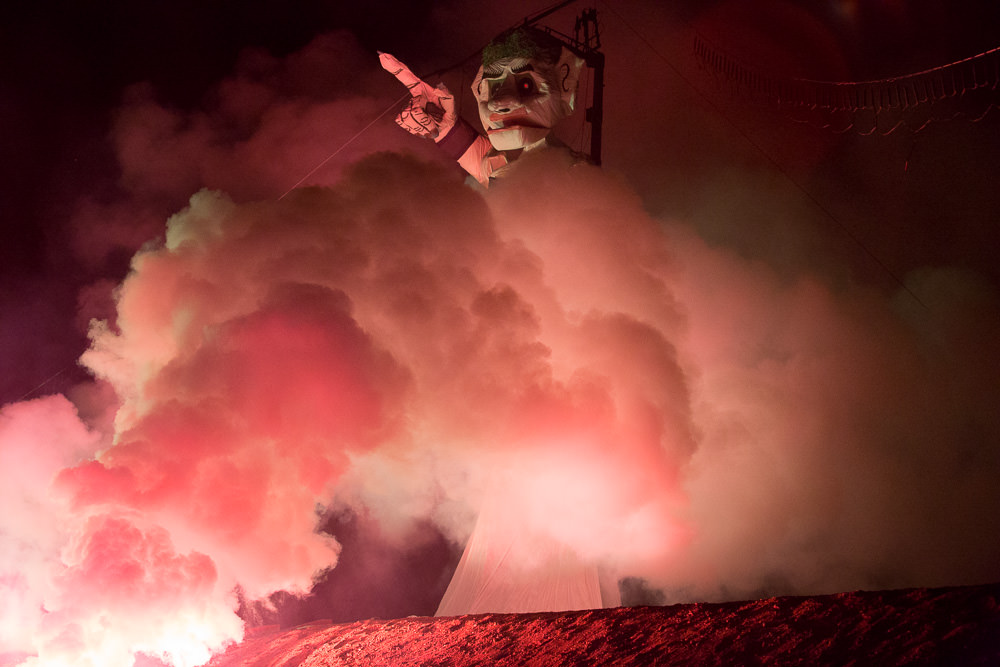 Will Shuster himself constructed the figure of Zozobra until 1964, when he gave his detailed model to the Kiwanis Club to continue the tradition. Over the years the effigy has steadily grown larger, reaching its current height of just over 50 feet. Zozobra’s framework of carefully milled lumber is covered with many rolls of chicken wire and over 70 yards of cotton cloth, before being stuffed with bushels of shredded paper, which traditionally includes obsolete police reports, paid-off mortgages, and even divorce papers.

The festival is so popular that children arrive in the park in the morning to watch Zozobra’s assembly. Spectators continuously roar, “Burn him,” until Zozobra is consumed in the flames that are his annual destiny. Since 1952, the show has raised over $1.6 million, which the Santa Fe Downtown Kiwanis Foundation has used to fund grants, college scholarships, and a variety of youth projects. Construction and staging of Zozobra normally takes place over a three-week span, a labor-intensive operation requiring over 3,500 hours from both Kiwanis Club members and local volunteers. Planning the event is a year-round activity, done in close cooperation with the City of Santa Fe.

A little-known fact in the history of the burning of Zozobra is that the old grouch has an elusive and equally grouchy cousin, Tio Coco, whom he summons to attend parties when he is unable or unwilling to make an appearance. Tio Coco was first introduced in 1940 at the behest of Warner Bros. Studios for the premiere of the movie “The Santa Fe Trail,” starring Errol Flynn, Olivia De Haviland, and Ronald Reagan. Tio Coco was invited by his cousin Zozobra to appear again at the special guest for the Convention of the Southwest District of Kiwanis International. 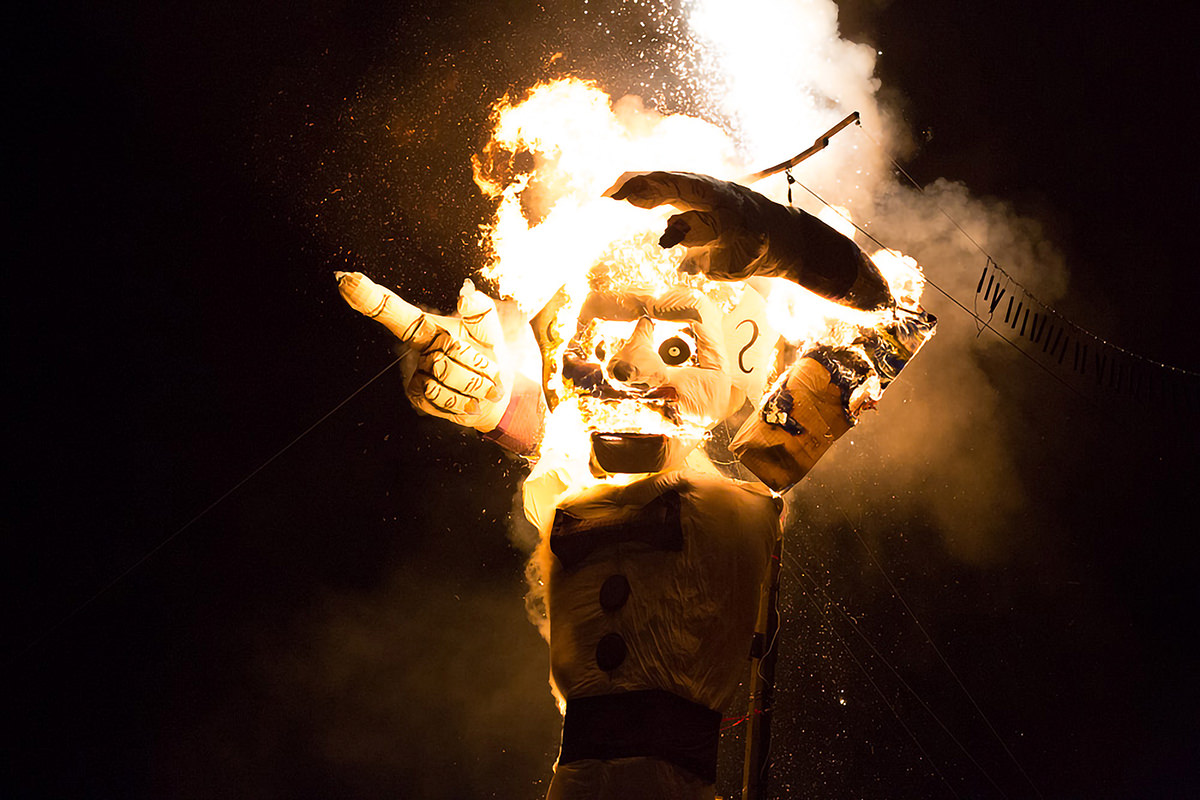 A Description of the First Public Zozobra Burning Appears in the September 2, 1926 Edition of the Santa Fe New Mexican:

“Following vespers at the Cathedral, a long procession headed by the Conquistadores Band marched to the vacant space back of the city hall, where Zozobra, a hideous effigy figure 20 feet high, produced by the magic wand of Will Shuster, stood in ghastly silence illuminated by weird green fires. While the band played a funeral march, a group of Kiwanians in black robes and hoods stole around the figure, with four others seated before the green fires. When City Attorney Jack Kennedy on behalf of the absent Mayor, solemnly uttered the death sentence of Zozobra, with Isadoro Armijo as interpreter, and fired several revolver shots at the monster, the green fires changed to red, the surrounding ring of bonfires was ignited, red fires blazed at the foot of the figure and shortly a match was applied to its base and leaped into a column of many-colored flames. As it burned the encircling fires blazed brighter, there was a staccato of exploding fireworks from the figure and roundabout and throwing off their black robes the spectators emerged in gala costume, joining an invading army of bright-hued harlequins with torches in a dance around the fires as the band struck up “La Cucaracha.” Following which the crowd marched back between bonfires lining the streets to the armory and the big baile was on. It brought out the biggest crowd of native merrymakers seen here for years….” 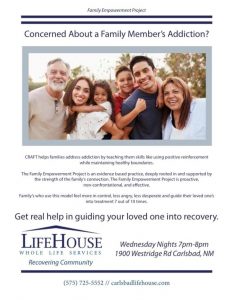 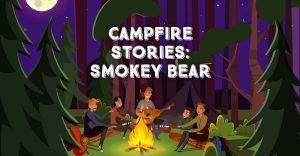 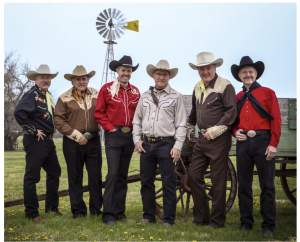