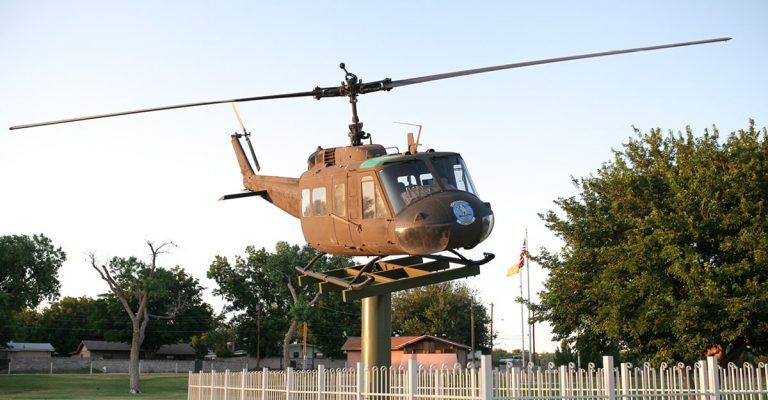 The community has a long-standing tradition of recognizing and celebrating local servicemen and servicewomen. Carlsbad remembers veterans annually during its Veterans Day Program, but the city’s commitment to honoring veterans is a daily practice.

One symbol of pride on display in Carlsbad is located in Veterans Memorial Park. Dramatically situated to replicate a live-action descent, the Huey helicopter is an outstanding way to commemorate our veterans. Huey helicopters, with the unmistakable beat of the rotor and recognizable body style, are icons of the Vietnam War.

As explained by the U.S. Army Heritage & Education Center, this helicopter was “nicknamed the ‘Huey’ after the phonetic sound of its original designation, HU-1. The HU-1 ‘Iroquois’ helicopter was the workhorse of the Army during the Vietnam War.” Although the HU-1 began as a medical helicopter, at the height of the war Hueys had three different functions: they were slicks, dust-offs, or gunships. Slick was the name for the transport version of the Huey, dust-off was the official call sign for the medical choppers, and gunships were just what they sound like, aerial artillery, explained R. Lee Ermey, a retired Marine, reporting for the History Channel.

It is estimated that Huey helicopters are responsible for transporting nearly two million wounded soldiers throughout the conflict. With so many functions, around 5,000 Hueys were utilized during the Vietnam War, and more than half were lost to enemy fire.

Carlsbad is lucky to have found one of the Huey survivors. More than five years in the making, the Huey helicopter installation was a community effort. Community members and the Veterans Memorial Park Committee looked high and low to add the final touch to Carlsbad’s “world-class facility” at Veterans Memorial Park. Eventually, Steve Angell, named an Outstanding Citizen of Carlsbad in 2020, tracked down a Huey in Cleburne, Texas, a small town south of Fort Worth. Excitedly, Steve phoned Carlsbad’s mayor, Dale Janway, immediately proclaiming, “Mayor, I found a helicopter. If you buy it, I’ll go get it.”

Mayor Janway found the money. $37,500 in grant money was awarded to the Carlsbad Veterans Memorial Park Committee by the Carlsbad Community Foundation for the purchase of the Huey helicopter addition to the park. “The Carlsbad Veterans Park has been coming together for many years as a way of recognizing the incredible sacrifice our veterans make for our country and our freedoms,” said Mayor Janway. “The presence of a Huey Helicopter at the park is going to make visiting especially meaningful.”

Huey helicopters weigh in over 10,000 pounds and measure nearly 60 feet long and 15 feet high. Transporting the Huey and mounting it on the carefully engineered stand was no small feat! Once again, the combined forces of the community and the City of Carlsbad worked together to conquer the challenge.

The Veterans Memorial Park’s Huey, specifically, tail number 17591, has its own stories to tell. Although the complete history of Aircraft 591, nicknamed by Steve Angell, is unknown, the Huey flew in at least two combat tours of duty in Vietnam. It sustained significant battle damage and was rebuilt twice.

The first damage happened in 1969. The Huey was flying with the 162nd Assault Helicopter Unit, The Vultures, in southern Vietnam. Used as a slick, or transport vehicle, at the time, the helicopter was sent in as the last in a five ship formation. As the Huey choppered into the landing location, the formation was surprised by heavy fire. After being struck in the neck by AK-47 fire, the pilot let go of the controls. The helicopter hit hard; the tail was torn off, the skids were bent, and the rotors were wrecked.

Rebuilt and back in Vietnam, Aircraft 591 was damaged a second time during a collision between two helicopters executing a formation. At first, the pilot of the Huey believed the chopper was having hydraulic issues. What actually occurred was “friendly fire.” The rotor of Aircraft 591 was hit by the main rotor of the other helicopter in the formation. While the other helicopter safely landed, Aircraft 591 had to employ a running landing, which is what it sounds like, and the Huey landed and slid one hundred feet on its right side.

Carlsbad’s Huey helicopter is a symbol of all that war entails. It is battle worn but proud. It has been through desperate situations and has carried its occupants with valor. It is an emblem of our gratitude to those who have served.

Veterans Memorial Park is a place of remembrance.

For some, a visit to the park will spark the memories of their own experiences serving in the military. For others, it is a chance to immerse themselves in the history of our country, a chance to stand under the Huey, Tail Number 17591, and hear the whomp, whomp, whomp of the rotor. To feel the wind from the blades spinning and the humidity of the jungle. To picture the face of a loved one, determined and proud as he steps onto the lush, green hills of Vietnam, ready to protect and defend the values our country holds so dear.

Veterans Memorial Park is a place of solace and reverence. The Huey helicopter installation offers a visual reminder to the community in a place where they may honor, grieve, and celebrate those who gave the ultimate sacrifice.