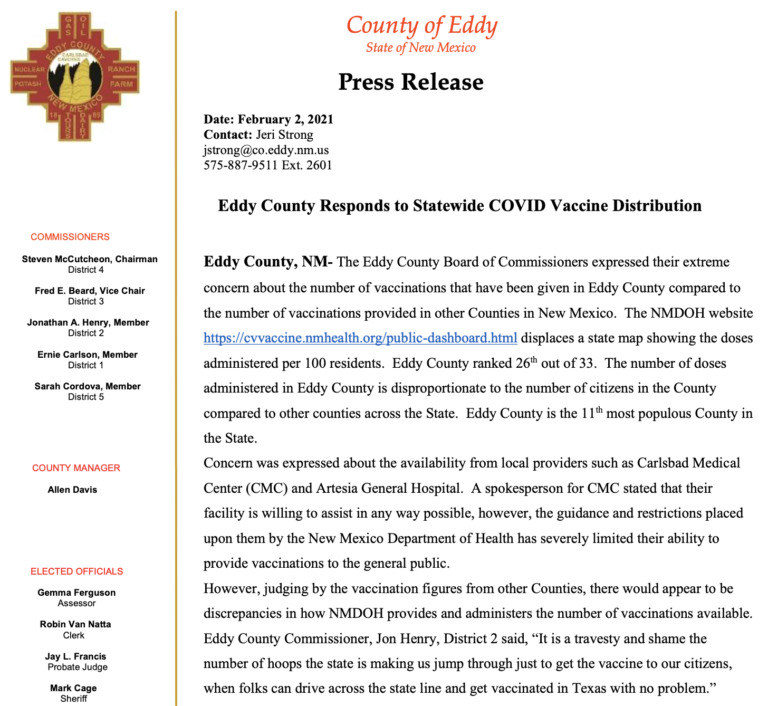 The Eddy County Board of Commissioners expressed their extreme concern about the number of vaccinations that have been given in Eddy County compared to the number of vaccinations provided in other Counties in New Mexico. The NMDOH website https://cvvaccine.nmhealth.org/public-dashboard.html displaces a state map showing the doses administered per 100 residents. Eddy County ranked 26 out of 33. The number of doses administered in Eddy County is disproportionate to the number of citizens in the County compared to other counties across the State. Eddy County is the 11th most populous County in the State.
Concern was expressed about the availability from local providers such as Carlsbad Medical Center (CMC) and Artesia General Hospital. A spokesperson for CMC stated that their facility is willing to assist in any way possible, however, the guidance and restrictions placed upon them by the New Mexico Department of Health has severely limited their ability to provide vaccinations to the general public.
However, judging by the vaccination figures from other Counties, there would appear to be discrepancies in how NMDOH provides and administers the number of vaccinations available. Eddy County Commissioner, Jon Henry, District 2 said, “It is a travesty and shame the number of hoops the state is making us jump through just to get the vaccine to our citizens, when folks can drive across the state line and get vaccinated in Texas with no problem.”Eddy County Commissioners want to ramp up the number of vaccinations available to citizens and have tasked County Administration to work with all entities to resolve the issues and establish a plan to change the current situation on behalf of the citizens of Eddy County.
Eddy County Office of Emergency Management is working closely with the NM Department of Health, the cities of Carlsbad and Artesia, Artesia General Hospital and Carlsbad Medical Center to establish more vaccine providers within Eddy County. Jennifer Armendariz, OEM Manager, strongly advises citizens to register for the vaccine at www.cvvaccine.nmhealth.org.Registered citizens would likely have better accessibility and notification when the vaccine becomes readily available in Eddy County.
Eddy County Press Release
Share on facebook
Share on twitter
Share on linkedin
Share on email 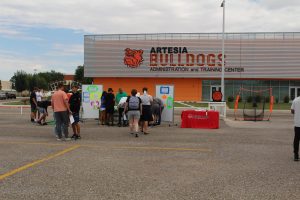 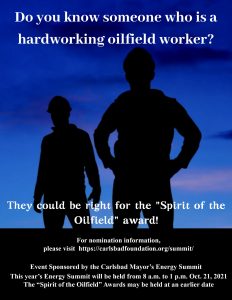