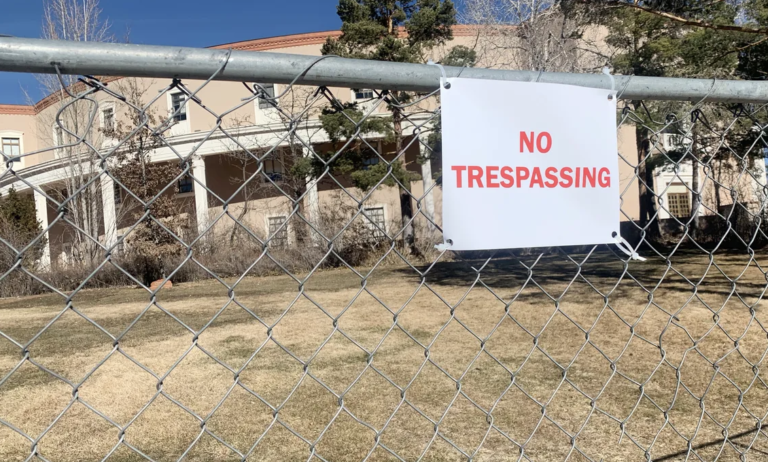 State police, Santa Fe County sheriff’s deputies and National Guard troops were prepared for political demonstrations to begin around noon outside the New Mexico State Capitol on Sunday, but not so much as a MAGA hat or Trump flag were in sight.

The Capitol building, known as the Roundhouse, has been encircled with chain link fencing for a week, and Jersey barriers and police vehicles closed Old Santa Fe Trail and Don Gaspar Avenue to vehicle traffic although pedestrians were still permitted to walk through.

Hundreds of protesters appeared at the Capitol, some on horseback, on Jan. 13 as the U.S. House of Representatives impeached President Donald Trump for a second time, charging him with inciting an insurrection on the day rioters stormed the U.S. Capitol.

Since the Jan. 6 riot in Washington, the FBI has warned of potentially violent political protests at state capitol buildings all over the United States, and extra security measures were taken in Santa Fe last week.

With the state’s 2021 legislative session opening on Tuesday and the inauguration of President-elect Joe Biden on Wednesday, access to the Capitol was completely restricted Sunday, the fencing dotted with “NO TRESPASSING” signs.

Yet the scene was quiet enough that the sounds of a raven cawing and the pinging from the Capitol’s flagpole could be heard clearly. State police on the scene seemed relaxed, and one officer even offered snacks to reporters walking near the grounds.

There was more activity near the historic downtown plaza, still bedecked with Christmas decorations and with Santa Fe police officers keeping watch, but no signs of political protests. It appeared instead to be a calm Sunday with temperatures in the mid 40s and mild breezes, locals and tourists strolling about, virtually everyone wearing masks in accordance with COVID-19 public health orders.

“It’s sad that it had to come to this, to where you’ve got to have fencing and state police and Santa Fe police and national guard posted all around the Capitol — that’s sad,” Ed Pulsifer, sales director at the hotel La Fonda, remarked while walking across the plaza with a colleague. “But at the same time, I think that’s why it’s been so quiet today. We were worried because we’ve had protesters here in the past.”

Usually at this time of the year, right before the legislative session begins, Pulsifer said the downtown area is buzzing with people, but this year it’s different.

“It’s like the Twilight Zone. Literally,” he said, partly due to the COVID-19 public health order.

“As long as we have indoor dining and can have some occupancy and can do 50 percent, everybody does pretty well, but as the public health order gets stricter and restrictions on COVID safety protocol, you know like right now with no indoor dining. It’s been up and down. It’s been a roller coaster for the last 10 months,” he said.

Now that people are getting vaccinated, Pulsifer said it was nice to see the light at the end of the tunnel.

“This is a kind, gentle town,” Steve Nojek, an Albuquerque resident who used to live in Santa Fe, said. He and his wife, Jessica Nojek, were sipping wine on a veranda near the plaza. “The energy is against violent protests,” he continued. “It feels good to be in Santa Fe.”