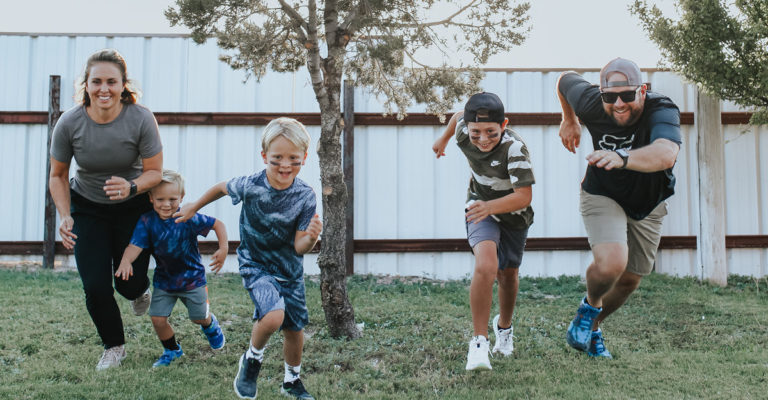 In years past, Artesians spent their Friday nights in a sea of orange, filling the Bulldog Bowl with hometown spirit.

Saturdays were for lugging lawn chairs to the soccer fields, the smell of orange wedges, grass, and Gatorade in the air. There were hectic evenings of homework, snacks, and hauling the kids to practice before dinner and bedtime.

The year 2020 has looked pretty different. However, we have been given a gift…Time.

Remember the treehouse that sat empty because the kids were too busy to play? Dust out the cobwebs — their schedules have been cleared. Family fun doesn’t require fancy equipment. Here are some backyard games to fill the many, many hours the kids aren’t at school, football practice, Grandma’s house, the movies — you get the drift. Normal may be on hold, but backyard fun doesn’t have to be!

A wild group of boys came up with this fun and fast-paced game in the dark. The rules of play combine two games we all know: hide-and-seek and tag. The seeker is “it” and has a flashlight. After counting to 50 at the agreed-upon base, the seeker will look for the other players. As “it” finds the other players, he/she will shine the light and try to tag the players found. The last person to make it back to the base without being tagged by the seeker is the winner.

Pool or no pool, this classic game is a fun way to get some energy out before lights out. Named after the famous Italian explorer, Marco Polo has been played in American pools and backyards since the 1960s. With eyes closed or covered (we all have spare face masks at this point), “it” will shout “Marco,” and the other players will reply, “Polo.” The person that is “it” relies on hearing to find and tag other players. The last person tagged is the winner or the first person tagged is the new “it.”

When the sun sets and it’s finally cool enough to play outside in southeastern New Mexico, grab a flashlight and try this fun game. The “tourist” who is viewing the statue garden gets a flashlight. All the other players must stay as still as a statue: they are allowed to move when the light is off, but as soon as the tourist turns the flashlight on, they must stay still. When the flashlight is on the statue, the tourist tries to make the statue giggle or wiggle. If they do, they join the tourist’s team and go tour for the next statue. The last statue standing wins.

Equipment: 2 Objects to represent the Flag  |  Players: Two Teams of 3+

A long-time favorite of summer camps and Scouts, capture the flag is a game rooted in history. The flag was hugely important to its defenders; when a flag was captured during a battle, it signified defeat. The idea of Capture the Flag is simple: grab an object in “enemy” territory and bring it back to your side. The team that does that first, wins. If you’re tagged in enemy territory, you’re frozen and no longer able to help your team.

A fun variation of classic tag! When you’re tagged, you join hands with “it” and have to try to tag others as a group. The more people who are tagged, the wilder the chain of “it” becomes!

This game is a modified hide-and-seek: one person hides while the other players cover their eyes. The goal is to find the hidden person and hide alongside them, making the space more and more cramped — like a can of sardines.

Every player gets a number and crowds around the person who is “it.” “It” then tosses the ball straight up and the other players run away. As the ball reaches the top of its toss, “it” calls out the number of one of the other players and runs away too. The player whose number was called must run back and catch the ball. Once that person has the ball, they yell, “SPUD!” Then everyone must freeze. The person with the ball must hit one of the players with the ball. If they do, the hit person is “it.” If they miss, the thrower of the ball is “it” for the next round.

Good, old-fashioned racing is not only great exercise, but a little competition makes for a great time too! Foot races, bike races, scooter races, three-legged races, relay races, the options are only limited to your equipment and creativity

My three sons employ this form of “entertainment” when two of them band together to torture the odd man out. The object of the game is to keep the person in the middle from intercepting the ball. Only play if desperate, or if two of the three players are short.

The changing of the seasons brings the feeling of new beginnings. Even though fall in Artesia will still be hot, COVID-19 will still be lingering, and schools will still be distanced, we can infuse our lives with a little fun! Head out to the backyard and play.