The Halagueño Arts Park surrounding the Carlsbad Museum and Art Center and the Carlsbad Public Library is the perfect place to take a short walk and immerse yourself into a creative space. 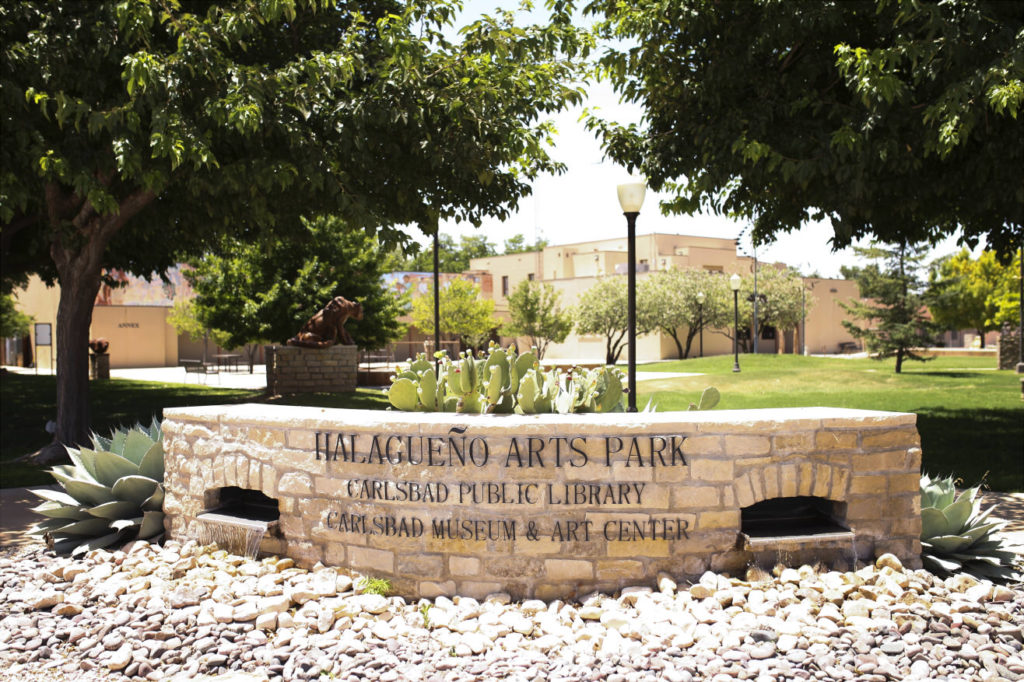 The sculptures and other creations scattered through the park are part of an ongoing project to enrich the downtown area in the heart of Carlsbad. As you make your way through the park, you’ll notice the thriving native desert plants and shrubs that outline the parks walking path and entrance. The large Oklahoma redbud trees create an ample amount of shade — providing a comfortable environment to sit and enjoy all of the art in the area, which is quaint and charming. 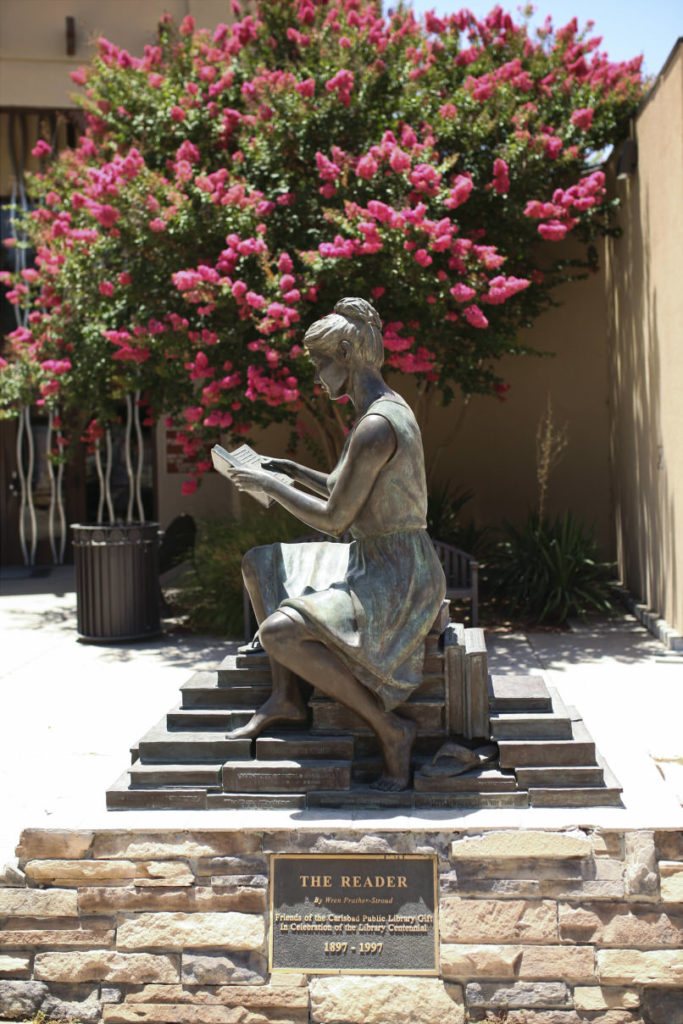 Several local artists are represented through the pieces you’ll find as you walk through the park. Wren Prather-Stroud, a native of Carlsbad, was commissioned to create the sculpture The Reader to commemorate the library’s centennial celebration in 1997. This unique piece sits beautifully at the entrance to the library and the detail in every aspect is incredible. Wren used a local high school student, Sarah Ross, to model atop the stack of books. The head of the figure forms the apex of the pyramid, with the concept that the knowledge from the books ultimately resides in the mind of the reader.

The first thing I noticed as I entered the park was the colorful mural painted above the library. Dream of a Sunday at Halagueño Park depicts the history of Eddy County and the details share an artful narration of Carlsbad’s story. The piece was created by Noel Marquez and was installed in 2006. Noel is an Artesia native and received the New Mexico Governor’s Award for Excellence in the Arts in 2008. 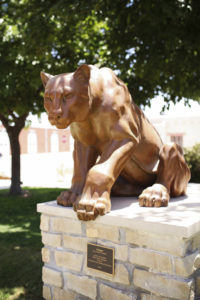 As I began walking, my eyes were drawn to a beaming structure at the corner of the block. From a distance, the large mountain lion looks to be guarding the entrance to the park. The Cougar by Cynthia Rowland was added to the park in 2019. The large bronze sculpture has a unique finish that creates a glowing effect in the desert sun. Cynthia graduated with a degree in Fine Arts from Texas Tech University. After a dozen years in New York, Cynthia came to New Mexico to pursue the medium of sculpture. Her work successfully developed into several major public and private commissioned projects. In addition to the bronze sculpture in Halagueño Arts Park, she has a sculpture on display at New Mexico’s Kirtland Air Force Base. 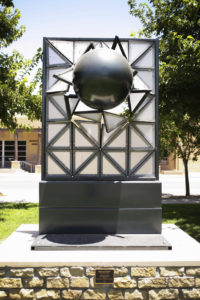 Next on the path, you’ll come across a mixed media sculpture by William Weaver. Ball in the Window was installed at the art park in 2019. Weaver tackled the opportunity to create this piece when he was the beneficiary of leftover scrap glass from an airplane. He is a highly-regarded artist with work on display across the nation, and throughout northern New Mexico and Colorado in particular. 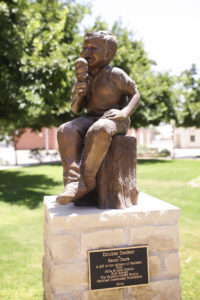 Sandi Clark has also created three of the sculptures that reside in Halagueño Park. She found inspiration in New Mexico and settled in Santa Fe where her sculpting career was born. Double Decker, Once upon a time, and Viola were all installed in 2014 as a contribution from Julia and John Heaton, Xcel Energy, the Houston-Carter Family, and the Carlsbad Community Foundation. While each sculpture is a separate piece, the three lifelike figures are arranged together at Halagueño park and give a realistic sense of three children just hanging out. Sandi’s work consists of fountains and meticulously accurate bronze depictions of animals and people. 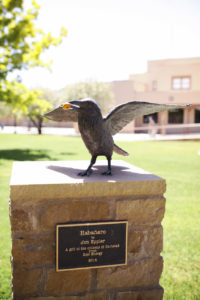 One of my favorite pieces in the park is by Jim Eppler. Habanero is a bronze sculpture of a raven holding a habanero pepper. The piece, donated by Xcel Energy in 2014, is fun and unexpected. Jim Eppler is an artist in the truest sense and has been praised for his lifelike recreations and his gentle interpretations. He developed this appreciation for nature at a young age. As a small child growing up in El Paso, he would spend many hours outdoors, observing animals to sketch and paint. 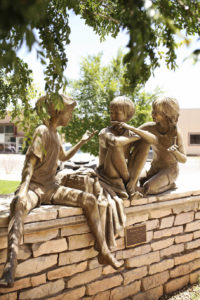 At the entrance to the art center, you’ll find several more lifelike bronze sculptures. Facts of Life by Glenna Goodacre was given as a gift to Carlsbad’s citizens in memory of Betsy Feezer from Frances Feezer in 1998. The Facts of Life is a playful rendering of three children having a picnic and a chat. As a gift from the Feezer Fine Arts Acquisition Fund through the Carlsbad Foundation, two of the pieces Ollie and Dance Day, of the multi-figure sculpture Sidewalk Society, were installed in July 1994. Ollie and Dance Day are related pieces. Ollie depicts a boy performing a balancing maneuver on his skateboard, as the little girl in the related sculpture watches him, while Dance Day depicts a Native American mother and her little girl. 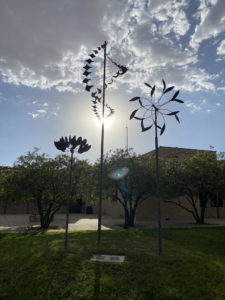 Just beyond the fixed bronze sculptures, my eyes were drawn to the dancing lotus and spinning helix of the wind sculptures by Lyman Whitaker. With 32 years as a professional sculptor, Lyman has a vast knowledge of metals and design. This, coupled with his love of nature, is the foundation for his unique wind sculptures. The three copper wind spinners at the park embrace the natural climate and use the desert wind as an advantage, the movement is soothing and mesmerizing. The wind sculptures Lotus and Double Spinner were contributions from The Edna Parks Carter and Alice Carter Houston Arts and Humanities Fund and the Carlsbad Community Foundation in 2018. Star Dancer was installed in 2017 and donated in part by Carla and Neal Dungan, Julia and John Heaton, and the Carlsbad Community Foundation.

There are many, many more amazing art installments through the park. Currently, crews are working to restore the north side of the park and more art will be placed in the near future. Take some time to do your own walking tour through the area so that you can enjoy the creativity of the artists and hard work from the City of Carlsbad.