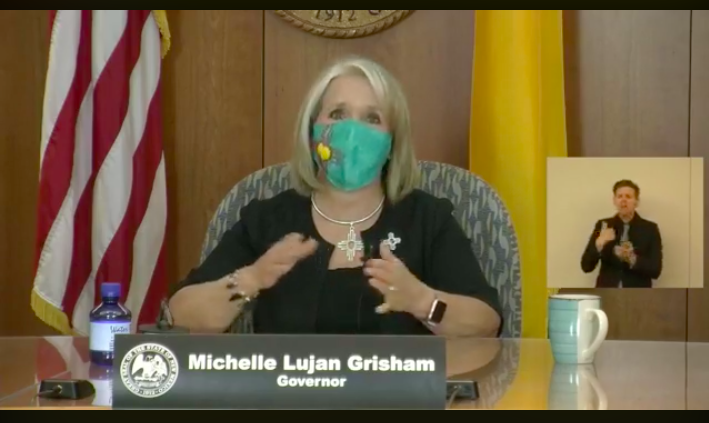 SANTA FE – The current regime of business restrictions and related public health orders pertaining to the COVID-19 pandemic will remain in place through the month of August, Gov. Michelle Lujan Grisham announced Thursday.

That includes indoor occupancy restrictions for restaurants, gyms and some other businesses, as well as a statewide requirement to wear a mask in public and a ban on gatherings of five or more people.

Meanwhile, Lujan Grisham said she would renew her executive order mandating all travelers into New Mexico from out of state to quarantine for 14 days.

The governor spoke during a news conference conducted via video conference from the state Capitol building in Santa Fe.

With fewer than 100 days to go before the November election, the governor did not detail any new enforcement initiatives focusing on in-person political campaigning or protests, but called such gatherings “hugely problematic” and asked New Mexicans “to think about doing that work differently.”

At the very least, Lujan Grisham asked organizers of demonstrations or rallies to ensure social distancing and universal mask-wearing, but reiterated the advice of epidemiologists that prolonged contact creates risks for exposure and transmission.

Door-to-door campaigning, she said, “is just a terrible idea in a COVID world,” and while she said there was no data linking political protests to outbreaks of the disease, she conceded that such gatherings still present risks.

“I need New Mexicans to practice these efforts much better,” she said.

The state Department of Health announced an additional 255 cases Thursday afternoon, bringing the aggregate total to 20,388 positive tests out of 551,637.

There were 156 people hospitalized in the state with COVID-19, the disease caused by the novel SARS-CoV-2 coronavirus, with 33 people on ventilators.

Three additional fatalities in McKinley and San Juan counties brought the state’s COVID-19 death total to 635, while the DOH has designated 8,015 cases as having recovered.

On Wednesday, positive cases in New Mexico surpassed 20,000 since the state’s first cases were announced on March 11.

New Mexico Human Services Secretary David Scrase said a downward trend in new cases over the last two days was a hopeful development he hoped to see sustained, but it was too soon to celebrate.

Scrase also presented data, based on seven-day rolling averages, indicating the rate of hospitalizations relative to new cases was trending downward, which he said could be related to a demographic shift in which younger adults and children over the age of 10 are seeing higher rates of infection but with fewer hospitalizations or serious complications.

In comparison to Arizona’s more rapid approach to resuming business activity, Scrase said the two states has achieved similar economic outcomes while New Mexico saw fewer of its residents die from the disease.

“It isn’t an either/or situation,” Scrase said. “We have to learn how to live in a COVID-19 world.”

But he said further reopening was not advisable yet, and Lujan Grisham called on New Mexicans to amend their behaviors to maximize safety and reduce the rate of transmission.

The goal, she said, was to see sufficient improvements in community spread and demand at hospitals during August to allow schools to resume limited in-person instruction after Labor Day.

This would be under the previously announced “hybrid” model in which half of a school’s population would attend class in person while the other half participated in online learning, on a rotating basis.

“Without everyone being able to go back to school in person, I have no doubt that we’re going to fall short on meeting everyone’s needs in child care,” she warned.

The governor said she hoped to announce lifts in some business operations in September – or sooner, if conditions permitted.

Additionally, she said the state would work to expand testing and contact tracing efforts while improving testing response times.

What are the 5 riskiest industries?

New Mexico Environment Secretary James Kenney spoke about the state Environment Department’s “rapid response” program which, since May, has reached out to workplaces upon learning of a confirmed case at a business facility.

The department works with employers on testing workers and instituting best health practices particular for their facilities.

The five industries comprising 60 percent of those rapid responses were:

The governor lamented the fact that a $600 federal supplement to unemployment insurance benefits would expire Thursday before Congress had agreed to a new support package, and presented a number of online and telephonic resources for a variety of needs related to the economic impact of COVID-19 on New Mexico workers:

Lujan Grisham also summarized programs offering $600 million in state assistance in the form of loans or grants, and urged owners to call 833-551-0518 and then choose option 2 for information about the programs accessible for them.

DOH data and resources related to COVID-19, including current public health orders, are accessible at http://cv.NMHealth.org.