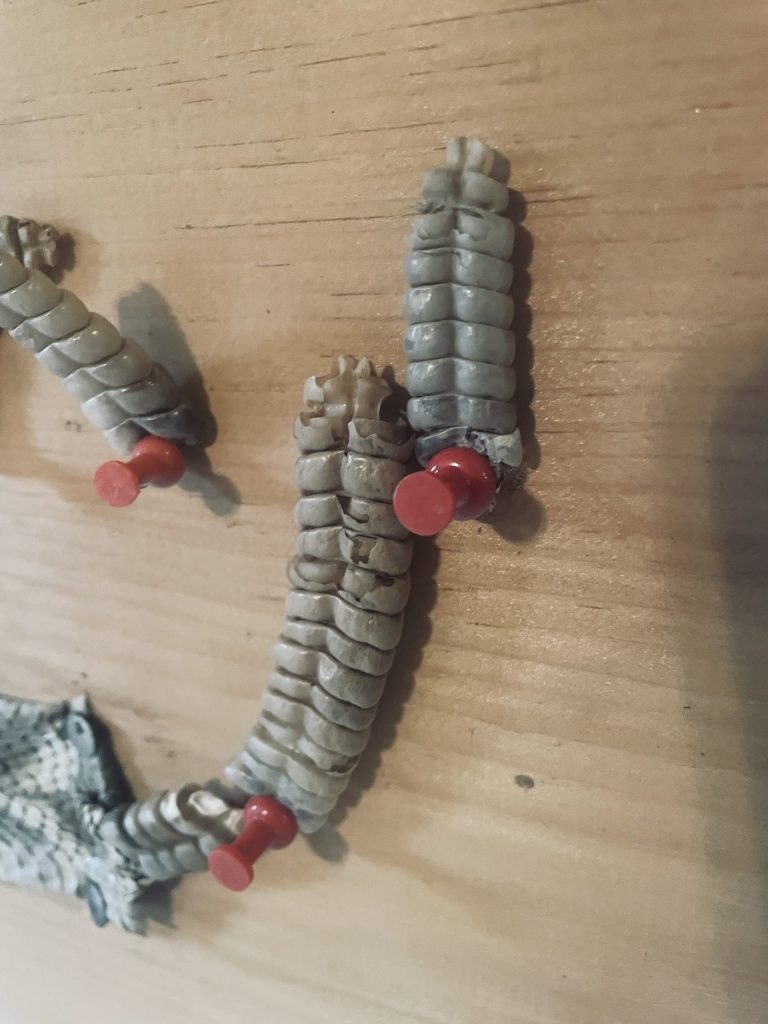 In the tall tale of Pecos Bill, the legendary hero of the Southwest, selects a diamondback rattlesnake as his lasso of choice, or his whip depending on which version of the legend you’ve heard. He twirled the snake above his head until it stretched to the desired length for the fictional cowboy to rope off of his famous steed, Widowmaker. The story of the cowboy with a rattlesnake for a rope seemed completely out of the realm of possibility, until my husband brought home a historic New Mexican diamondback snake skin tacked to a board.
The skin itself measures over six feet five inches long–much longer than the average human adult. The width of the snake would have been just as impressive as its length. Stretched across the width of the board, the many hollows left by the hundreds of ribs measure six inches long, meaning that the living snake would have had a girth of several inches. I can’t even begin to guess at the weight, but the slithering serpent must have packed a punch when it struck its prey in the desert; if the bite wasn’t enough to stun, then the force of the hit surely was. The legend of Pecos Bill and his coiled snake rope became too plausible when I stood next to this desert rattler.
Taking a closer look to count the buttons on the snake’s rattling tail, I counted 29 individual buttons. Like the rings inside a tree, the buttons on a rattlesnake correlate to a snake’s age in years. 29 buttons reveal the snake’s age to be 29 years old. Legendary years to go with the snake’s size. While tall tales are the product of stories which have been embellished over the years, there always seems to be a glimmer of truth to their impossibilities. Pecos Bill’s rope refers to the great length that some of New Mexico’s desert rattlers can reach.
Share on facebook
Share on twitter
Share on linkedin
Share on email