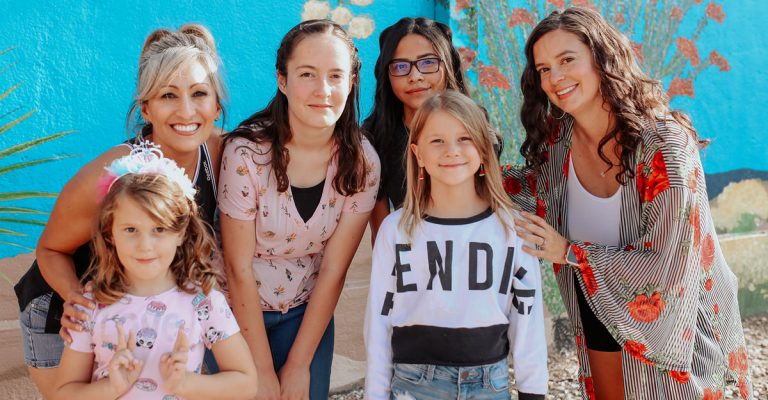 Under a sky of azure,
Where balmy breezes blow,
Kissed by the golden sunshine,
Is Nuevo Mexico.

An azure sky splashes brightly across a vista of brown. A new mural graces the walls of Artesia; this one created by four local art students, AJHS art teacher Brandi Cox, and me. From the planning stages of the mural to its completion, the kids were an integral part of it all. I was originally approached about a mural last summer by the Peyton Yates (PY) Foundation. At the time I did not feel like I had the experience or the manpower to pull off a large-scale mural alone. When Cox learned about the potential project, her enthusiasm was palpable. Backed by her construction experience and confidence in some of her best students, she knew we could pull it off. We joined forces and began planning.

Although school was still in remote learning at the time, Cox had seen great artwork out of two students, Andrea Alvarado and Megan Cluff, so she recruited them to help us begin drafting. Both of these young ladies were in my art class at Zia Intermediate School, and I was delighted to be working with them again.

Alvarado, a freshman at the time, heavily influenced the overall design with her original concept painting of a yucca on blue gradient background. She observed, “We live in such a beautiful state. I wanted to show that with the design and capture every detail. I wanted to capture the ‘Land of Enchantment.’” Andrea had to leave town for a family emergency as the painting commenced. We were devastated to lose the help of such a capable artist, and she was sad to miss out, but she explained, “When I started receiving pictures, I got excited because I saw the progress of the mural.” Alvarado returned in time to help put the finishing touches on the desert scene, and we were thrilled to have her back.

A red House Finch peers from atop a prickly pear cactus. The bird, inspired by Cluff’s initial colored pencil studies and painted by her and Cox, was a favorite of building owner, Lisa Boans when reviewing mural options. According to Cluff, “One of the most common birds in New Mexico is the House Finch. I like the colors and the details in this particular bird. I spent a lot of time on this particular part of the mural, trying to get it perfect.”

Along with Alvarado and Cluff, Irelynn Ramsey and Anna Netherlin spent hours in the sweltering summer heat completing the mural. These girls contributed their talents through triple digit heat, 60 mph winds, and 100% humidity. As an adult, I have been known to enjoy sleeping in and lazing away my days of summer vacation, so the dedication displayed by these young artists each day was impressive. They held themselves to high expectations concerning the quality of their work. Anyone who accuses the younger generations of laziness has not met these four young ladies. “We worked long hours in the heat, even started working earlier and earlier. I was exhausted by the end of the day,” reflected Cluff.

As the mural was beginning, I sat on my couch one evening trying to decide on the final layout. My daughter, Lola, joined me and began working on her own sketch. Her outline, while similar to mine, included one important addition—a scorpion front and center. As soon as I saw it, I knew it would be a great feature, adding an element of danger to an otherwise serene scene so I immediately stole the idea from my 8-year-old. Lola and her sister, Violet (6), also assisted with painting the mural. When asked about the scorpion, Lola said, “It was just a desert and bugs are usually there, and I thought a scorpion would be nice.” Thus, Lola, the aptly named bark scorpion, can be seen crawling towards the viewer in the foreground. 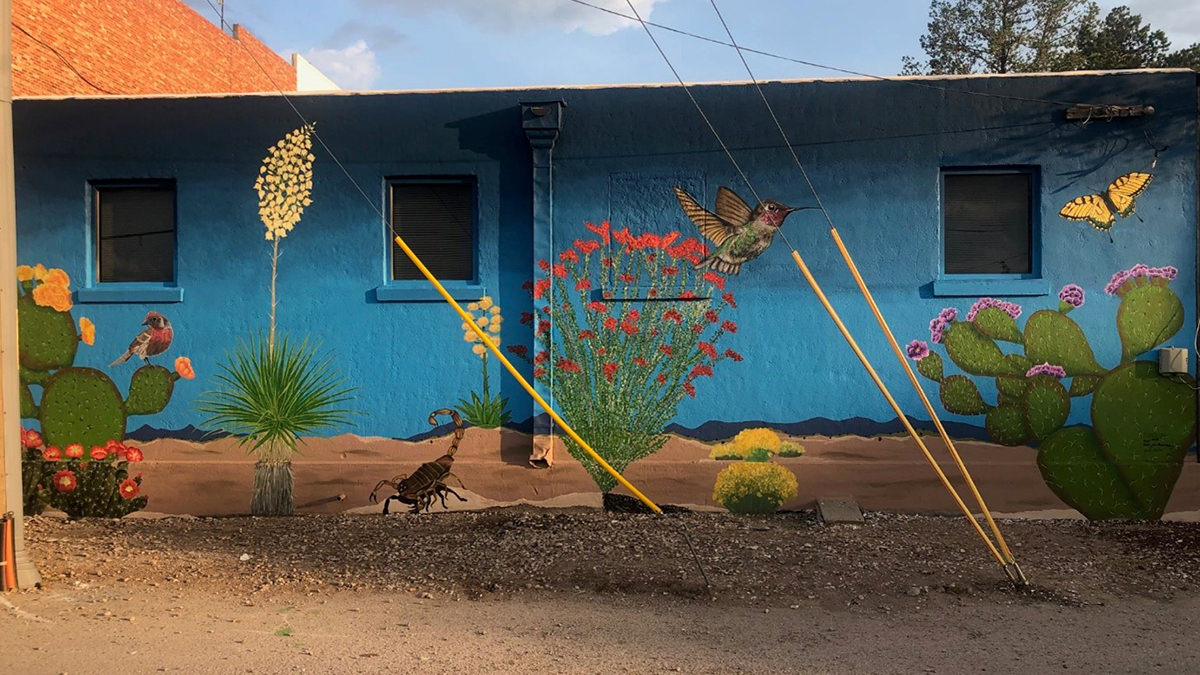 More flora and fauna native to New Mexico join the scene including a Claret Cup Cactus, a Century Plant, an Ocotillo, an Anna’s Hummingbird, and a Black Swallowtail Butterfly. Our mural, Under a Sky of Azure, was organized with the help of Nancy Dunn from the Artesia Arts & Cultural District, Destiny Rojo from the PY Foundation, and Elisabeth Jackson of Artesia MainStreet. Funding was provided by the Written in Red Foundation. You can see our mural at 104 N. 5th Street in Artesia, N.M., home of Bulldog Delivery. You might see more murals from these students in the future. Cluff and Alvarado both mentioned they enjoyed the experience so much that they would like to do more.