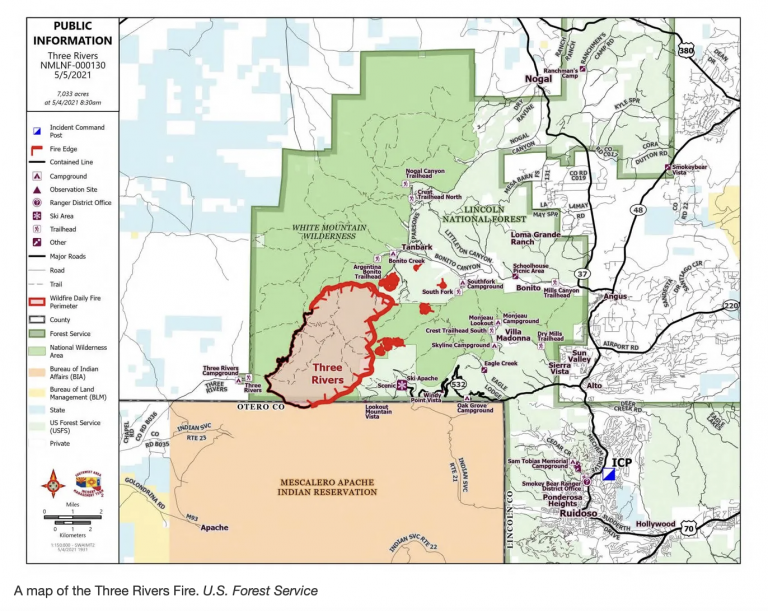 Areas of the White Mountain Wilderness that were closed due to April’s Three Rivers Fire reopened.

Trails including Argentina Canyon Trail and parts of the Crest Trail near Ruidoso, New Mexico reopened but the Three Rivers Burn scar area remains closed as are areas on the mountain that are prone to flooding, according to a Lincoln National Forest news release.

The Three Rivers Campground which is at the base of the burn scar is closed for the foreseeable future due to potential for flooding and landslides once monsoon rains begin.

“We know many people have eagerly been waiting to visit the White Mountains once again,” Smokey Bear District Ranger Camille Howes said.

“The partial opening allows people to experience the wilderness while also addressing the added hazards in the burned area.”

The burn scar has an increased risk of flooding and possibly mudslides once the monsoon sets in.

“Flooding and mudslides are common after a fire because there is no longer vegetation to hold soil in place,” the news release states.

“Visitors to the White Mountain Wilderness should be aware of the weather and potential storms when planning their visit. Weather can shift quickly in the mountains, and heavy rains can rapidly develop.”

The Three Rivers Fire started April 26 and burned more than 7,000 acres. The cause is still unknown and is under investigation.

The Lincoln National Forest is under fire restrictions due to drought conditions prohibiting campfires of any kind unless in a Forest Service provided fire structure.

Fireworks and other pyrotechnic devices are not allowed on the Lincoln National Forest.

For more information about closures on the Lincoln National Forest visit https://www.fs.usda.gov/alerts/lincoln/alerts-notices or call 575-434-7200.

Nicole Maxwell can be contacted by email at nmaxwell@alamogordonews.com, by phone at 575-415-6605 or on Twitter at @nicmaxreporter.