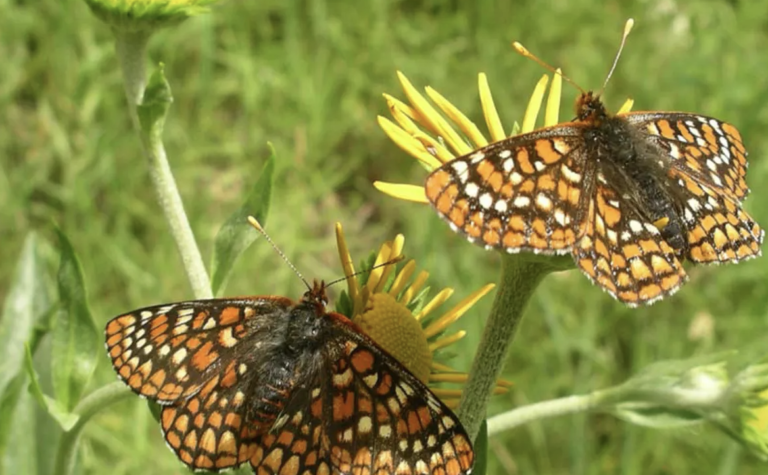 A small butterfly once dwelled in large numbers throughout the meadows of the Sacramento Mountains in southern New Mexico.

It feasted on the nectar of the orange sneezewood at elevations as high as 2,750 feet above sea level around Cloudcroft.

But as climate change and development continued to grow in the area, conservationists worried the Sacramento Mountains checkerspot butterfly could one of the most endangered in the U.S.

The Center for Biological Diversity filed a petition this week with the U.S. Fish and Wildlife Service seeking to list the butterfly as “endangered,” the highest protection possible under the Endangered Species Act (ESA).

The petition argued the butterfly had declined rapidly since the Service began formal surveys in 1999 and today was almost undetectable in its historic range which extends through Lincoln National Forest and the Capitan Mountains.

Like many indicator species, the decline of the butterfly could mean its habitat is shrinking and that forms of vegetation the checkerspot needs to survive are being lost.

“The sharp decline of the Sacramento Mountains checkerspot butterfly is alarming,” said Tara Cornelisse, entomologist at the Center. “We hope it’s not too late to save it.”

The Fish and Wildlife Service originally proposed to list the butterfly as endangered in 2001, and a conservation plan was released in 2004.

In 2008, the Service filed a 90-day finding that a listing might be warranted, but after a subsequent 12-month finding was completed in 2009, the federal government decided a listing was not needed, citing a lack of data on its range and population.

“We are shocked by the Service’s refusal to grant protection to this butterfly, which is fluttering on the knife’s edge of extinction,” said Nicole Rosmarino of WildEarth Guardians upon the listing denial in 2009.

“This butterfly occurs on less than 2,000 acres and faces many threats within that small area, and yet the feds are continuing to ignore its plight.”

After filing the recent petition, Cornelisse blamed the butterfly’s continued decline on inadequate protection efforts by the federal government.