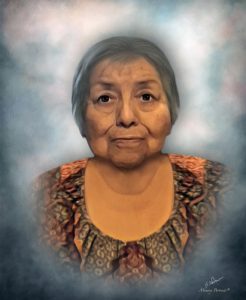 Private funeral mass will be held for Consuelo Martinez of Artesia, New Mexico.

Consuelo “Connie” Martinez 81, of Artesia, NM was received in Heaven on April 4, 2020 by our Lord and Savior Jesus Christ. She was surrounded by family as she transitioned into Eternal Paradise.

Connie was born on November 2, 1938, to Antonio and Gertrude Rodriguez. She was the eldest of seven children. She was a graduate of Carlsbad High School, after high school she married and had seven wonderful children (some may debate). Shortly after her seventh child was born she made the decision to go to nursing school. Her adult children often teased her that she had gone to nursing school to find out why she kept having babies, LOL. Through many toils, trials, and seven mischievous children, she was pinned a LPN Nurse. Although a stroke may have deterred her from fulfilling her dream of retiring as a nurse, she still continued to use her knowledge to help others.

First and foremost, Connie loved and wholeheartedly believed in Jesus Christ The love Connie had for her family was shown in many ways, from the discipline with her “chancla” and her telling them that they could do anything they set their mind to do. Connie loved her grandchildren, some of them were ornery as heck when they messed with her animals! Then came her great-grandchildren, the love of and laughter they gave so openly and freely, made her complete. Connie was passionate about New Mexico history and any western that she could read or watch on television. She also liked long country drives that ended with a Sonic green chile cheeseburger.

In lieu of flowers the famliy has asked that people always remember the elderly, those that live alone, those in assisted living or in a nursing home. The joy residents feel to know that they are not forgotten is overwhelming! Sending cards or flowers to residents will truly be a blessing to them!

The family is forever grateful to the staff at the nursing home for all the love and care they provided our precious Momma.