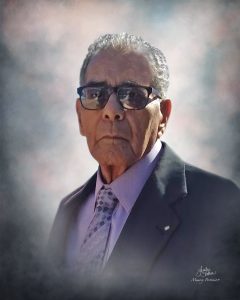 On Wednesday, March 18, 2020 the greatest man we will ever know, our Father and Papo, Sam Bejarano of Artesia, NM took our Grama Jane’s hand as she led him through the gates of Heaven. Papo Sam was born on November 29, 1932 in Marfa, TX to David Valenzuela and Rosa Garcia. He was 87 years old at the time of his passing into eternal life. Together he and his wife Jane of 60 years raised their family in Artesia, NM. She preceded him in death on February 14, 2018. He was also preceded in death by his infant daughter Olga Bejarano, parents David Valenzuela and Rosa Bejarano, sibings Emma Hernandez, Elodia Rivera and Enedina Martinez, in addition to his grandchildren Jaydon Andrew Bejarano, Ysaiah Contreras and Deciderio Gonzales.

Papo enjoyed a long career as a heavy equipment operator for Navajo Refining, retiring in 1991 after many years of service, lastly as a crane operator.

Among his favorite hobbies was attending Bulldog Football games, tending his animals and lawn, going to First American Bank on Fridays for popcorn and watching his grandkids. He was a member of the ASPCA and was named as a Headstart Volunteer of the Year when his grandson Elijah attended there. He ws always taking the kids to go on errands with him and ending the trip with a treat. He never met a stranger. We are so proud and thankful for him. He took care of our Momma until her last breath and he is now enjoying his reward with her. Papo and Grama were strong believers in Christ, and having passed that belief to their family we are greatly comforted he is reunited with her and other saints who have gone before us and we look forward to our Heavenly reunion.